Rebecca Pierce has accused Jews of “white supremacy," defended an anti-Semitic conspiracy theory and expressed support for a terrorist. She has also promoted a violent agitator, opposed Muslim-Jewish dialogue and demonized Israel.

Pierce was an activist with the Committee for Justice in Palestine (CJP), an affiliate of Students for Justice in Palestine (SJP) at the University of California Santa Cruz (UCSC).
Pierce is a “core member" of the Jews of Color and Sephardi/Mizrahi Caucus (JOCSM), a partner organization of the anti-Israel Jewish Voice for Peace (JVP) organization. In November 2016, Pierce represented JVP on a delegation to France.

As of June 2018, she was the Editor-in-Chief of “Unruly," a “racial justice blog" organized by JOCSM and JVP.

She is a supporter of the Boycott, Divestment, Sanctions (BDS) movement.

Pierce is also affiliated with IfNotNow (INN), an organization that has demonized Israel and seeks to drive a wedge between American Jewry and Israel.

Pierce is a member of the International Jewish Anti-Zionist Network (IJAN) Facebook group.

As of June 2018, Pierce’s LinkedIn page said she graduated USCS in 2013 with a bachelor’s degree in Film and Digital Media. Her LinkedIn also said that she works as a “Legal Investigator and Case Assistant" at Pierce & Shearer, LLP, as well as an event videographer at Art Forces. She was also listed as a freelance multimedia journalist.

On November 10, 2016, Pierce tweeted: “You cannot ignore white supremacist components of fascism in Israel OR US. It is the literal structure through which violence is enforced."

On July 6, 2016, Pierce tweeted: “White Jewish people wishing to employ the notion of intersectionality should start by not using JOC as rhetorical tools to defend racism."

On September 17, 2015, Pierce tweeted: “Interesting article that sadly glosses over the link between Zionism & white supremacy in the Jewish community."

On July 11, 2017, Pierce slammed an article published in Haaretz that condemned JVP for producing an anti-Semitic video, tweeting: “This a bad faith punch down on JVP that only serves to cover up active support for white supremacy in Jewish community."

Odeh was a military operative with the Popular Front for the Liberation of Palestine (PFLP), an internationally designated terrorist organization. In 1969, she masterminded a bombing that killed two university students in a Jerusalem supermarket. Odeh also attempted to bomb the British consulate.

In 1970, an Israeli court tried and convicted Odeh for her involvement in both bombings and sentenced her to life imprisonment. However, Odeh was released 10 years later, in a prisoner swap and emigrated to the United States. In 2017, Odeh was deported to Jordan and stripped of U.S. citizenship, after admitting to immigration fraud.

On September 7, 2017, Pierce tweeted: “Issa Amro is under attack by both the Palestinian authority and Israel for his non-violent activism #FreeIssa."

Violent agitator Issa Amro — head of the Youth Against Settlements (YAS) movement — is known for vandalism and attacking Israeli soldiers in Hebron. Amro has been charged with numerous acts of violence against Israeli civilians and security forces.

YAS, an anti-Israel NGO based in Hebron, has posted photos on its Facebook page that propagate anti-Semitism, laud rock-throwing and urge its members to participate in violent anti-Israel demonstrations.

On January 14, 2015, Pierce attacked the Muslim Leadership Initiative (MLI), tweeting: “Can we start #JewsAgainstMLI because personally I don't see working w the Israeli government as valid ‘dialogue’ with Jewish community."

According to Antepli, “MLI aims to put mainstream North American Jewry in conversation with their Muslim counterparts."

On November 8, 2015, Pierce tweeted: “So generalizing Zionism as ‘Jewish belief’ isn't just false, it is actively antisemitic and directly harms our communities. Stop doing it."

On October 16, 2015, Pierce tweeted: “If there's 1 thing I learned from living here it's that Zionism is just as anti-Black as it is anti-Palestinian. There's a direct connection."

On June 16, 2015, Pierce tweeted: “Israel has a problem with systematic racism, acting like individual racism is some kind of aberration is extremely silly."

On December 29, 2014, Pierce tweeted: “On my last trip it became clear that Israeli state violence has been inflicted on Jews of color since 48, & is part of the apartheid system."

The tweet linked to the #returnthebirthright campaign launched by JVP. 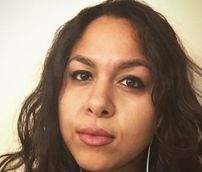