On October 15, 2015, Musa tweeted: “@AmyMek why are you jews so hateful? You arent ever going to control the world. Don't worry though god got a special place for you people.”

On October 14, 2014, Musa tweeted: “And now these dirty filthy Jews are literally dancing their way into the aqsa. It's f**king disturbing and pathetic.Get out of our country!”

In November of 2016, more than 1,770 wildfires —  including 39 massive wildfires — engulfed Israel over a period of eight days, requiring the evacuation of 75,000 people from the port city Haifa.

On October 15, 2015, Musa tweeted: “@AmyMek lmaoooooooo you f**king zionist whore! You evil deceiving bitch. Why do you people put words in our mouths.”

On July 4, 2014, Musa tweeted: “President Obama is a herb, straight up. And I hope this message gets to him.” Musa added: “@hamzathagr8 @BarackObama Nigga talking about how he feels bad about the Israeli mothers about how they feel when their kids die. Stfu obama.”

On May 3, 2017, in response to a tweet by Canary Mission exposing an anti-Jewish slur made by Mohammed Othman, Musa tweeted: “@canarymission hitler should've killed all of you bitch niggas.”

On January 20, 2017, Musa tweeted: “I don't like when people compare Trump to Hitler. Hitler unlike Trump, was actually doing something productive.” 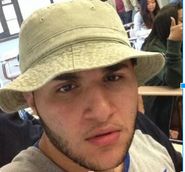