Maira is an international leader of the Boycott, Divestment, Sanctions (BDS) movement and co-founded the US Campaign for the Academic and Cultural Boycott of Israel (USACBI), in January 2009. She also cofounded Pakistanis for Palestine — with her husband, Magid Shihade — to call on Pakistanis to adopt BDS and to "oppose the normalization of Israel in Pakistan at the level of state and also civil society."

The anti-normalization strategy seeks to hinder collaborations between pro-Israel and pro-Palestinian sides unless the pro-Israel side first delegitimizises the Israeli narrative.

Maira has referred to Israel as a "rogue state" (p. 83) that does not comply with international law.

Maira is a professor of Asian American Studies at UC Davis.

In January 2016, Maira signed a USACBI petition “in support of the right to call for a boycott of Israeli goods in France."

Signers of the petition vowed not to comply with France’s highest appeal court’s legal ruling to prohibit the boycott of Israeli goods.

The petition opposed a French court ruling that found BDS promoters guilty of inciting hate or discrimination, in October 2015.

Maira is a member of the American Studies Association (ASA) and co-chair of its Activism and Community Caucus (ASA Caucus). In 2012, the ASA Caucus proposed a resolution calling for an academic boycott of Israel, which was later adopted at the ASA Conference in 2013. Maira was also involved with BDS campaigns in the Association of Asian American Studies, who on April 20, 2013 passed the first resolution in support of a boycott of Israeli academic institutions by a North American academic organization (21:07).

On January 30, 2014, Maira signed a statement expressing her “profound disagreement with the Chancellor’s and Provost’s published opposition" to the ASA academic boycott of Israel.

In October of 2013, Maira was also one of eleven professors to chastise the Journal of Academic Freedom for publishing a series of essays opposing the academic boycott of Israeli institutions.

Promoting Israel Hatred under The Guise of Human Rights Activism

BDS and SJP have both blamed Israel and Zionism for rising tuition costs, police riots in Ferguson, Missouri, race-based violence in the US, negative environmental impacts of the fossil-fuel industry, and campus rape.

In an April 9, 2014 blog post titled "The BDS movement and the front lines of the war on academic freedom," Maira blamed a “confluence of powerful Zionist organizations (such as the Simon Wiesenthal Center and the Israel on Campus Coalition) and university administrations that have eroded faculty governance and academic employment rights."

On October 30, 2014, Maira co-authored an article that called the Anti-Defamation League "baldly racist" for sending an email to Chancellor Katehi to warn her of planned hostile anti-Israel demonstrations on campus.

Maira described the “Israel lobby" as a “well-established structure of defamation, harassment, intimidation and bullying" and lamented that legal action, based on civil rights law, is taken against anti-Israel and anti-Jewish groups (24:24). To back up her claim, Maira ironically cited the case of a group of UC Irvine students, dubbed the “Irvine 11," who were arrested for repeatedly disrupting former Israeli ambassador Michael Oren’s talk at UC Irvine — using a premeditated strategy of defamation, harassment, intimidation and bullying to disrupt the event (25:05). Maira misleadingly referred to the illegal actions of the Irvine 11 as “a peaceful protest."

In a March 2016 interview, Maira falsely accused Zionists of portraying any criticism of Israel as being inherently anti-Semitic. She also stated that BDS is unfairly depicted as “racist" by the “Zionist lobby" (30:36). By singling out Israel for exclusive condemnation, Maira and the BDS movement openly engage in a display of modern anti-Semitism. Maira went on to blame Zionists for inciting anti-Semitism (31:30).

Lying and Deceiving to Demonize Israel, Israelis and Zionists

Maira published an anti-Israel essay in propagandist Ali Abunimah’s 2015 book “Against Apartheid: The Case for Boycotting Israeli Universities." In her essay, titled “The Ghosts That Haunt US: USACBI and the Settler University," Maira lied that Israel practices “apartheid" and cynically implied that apartheid and racial exclusion is the “fundamental character of the Zionist state" (p.84).

Maira also lied that Israel is committing “genocidal violence" and maintains “policies of annihilation" against Palestinians (p.81, 83) — although has been widely reported that the populations of Gaza and the West Bank are among the fastest growing populations in the world in recent decades. Also, the health of Palestinians has steadily increased since 1967, due to Israeli policies.

Maira repeated these lies in a July 2011 convention organized by Al-Awda, The Palestinian Right to Return Coalition — which advocates for BDS and the destruction of Israel. She also stated that Jews “act as if they are" indigenous to Israel, implying — falsely — they have no right to live there. (12:58). Maira gloated that the “legitimacy of Israel is really crumbling" (14:00) and bragged that BDS has become an “existential threat" (15:02). She also referred to Zionists as “our enemies" (15:20) and stated that BDS is “doing a service to the U.S. academy" (16:30).

Maira went on to assert — falsely— that the mostly failed Arab Spring was "deeply humiliating" to Israel, purporting — most prematurely — that the uprisings themselves proved there were other functioning democracies in the Middle East besides Israel (18:05).

In a March 2016 interview, Maira mischaracterized Israel’s security fence, built as a non-violent deterrent to Palestinian terrorist attacks — conducted mostly by suicide bombers — as the “Israeli apartheid wall." The atypical concrete portions of the fence were built in response to Palestinian sniper attacks.

Maira also falsely insinuated that a non-binding advisory opinion on the security fence, issued by the International Court of Justice was binding international law. (2:45)

Depicting Terrorists as Victims and Defense Against Terror as Aggression

The Social Text journal gained notoriety in 1996 for the Sokal affair, when it published a nonsensical article that physicist Alan Sokal had deliberately written as a hoax. The editors of the journal were awarded the Ig Nobel Prize for literature by "eagerly publishing research that they could not understand, that the author said was meaningless, and which claimed that reality does not exist."

Maira’s article whitewashed the actions of Jihadis who attacked Israeli security forces, whom the article misleadingly referred to as "international aid activists" who were supposedly “murder[ed]" on board the Gaza “Freedom Flotilla,"

The Freedom Flotilla of May 2010 was organized to breach a legal naval embargo imposed to stop illegal weapons imports to Gaza.

Activists aboard the “Freedom Flotilla"’s lead ship, the Mavi Marmara, claimed to be carrying humanitarian supplies to Gaza but agitated for violent confrontation with Israeli security forces and chanted “Khaibar, khaibar ya yahud" — a slogan glorifying the killing of Jews.

The protesters refused all instructions to change course and attacked Israeli security forces as soon as they boarded the Marmara with iron bars, metal chairs, knives, rocks, bottles, stun grenades and firearms.

The 2011 United Nations’ Palmer Commission report found that the flotilla agitators initiated an organized violent confrontation with Israeli forces. Following the incident, the Mavi Marmara was found to be carrying crude weapons but no humanitarian aid.

In November of 2015, Maira advocated for the University of Illinois (U of I) to reinstate Steven Salaita, who is now the Said Chair of American Studies at the American University of Beirut (AUB). 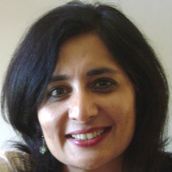