Snehal Shingavi is a co-founder of Students for Justice in Palestine (SJP). Shingavi has silenced pro-Israel students at the University of California, Berkeley (UC Berkeley) and has demonized Israel as a speaker at numerous rallies.

He has reportedly been arrested five times for various campus and political protests.

Shingavi is a supporter of the Boycott, Divestment and Sanctions (BDS) movement and has endorsed the US Campaign for the Academic and Cultural Boycott of Israel (USACBI).

As of July 2018, Shingavi’s LinkedIn page said he has been an Associate Professor of English at the University of Texas, Austin (UT Austin) since September 2009. He was an instructor in Postcolonial Studies at the University of Mary Washington (UMV) from 2008-2009 and a graduate student instructor in English from 1999-2008 at UC Berkeley, where he received his PhD in English.

In September 2002, Shingavi became the center of controversy when he created an undergraduate English class at UC Berkeley, titled "The Politics and Poetics of Palestinian Resistance."
Shingavi’s course description read: “The brutal Israeli military occupation of Palestine, an occupation that has been ongoing since 1948, has systematically displaced, killed and maimed millions of Palestinian people. And yet, from under the brutal weight of the occupation, Palestinians have produced their own culture and poetry of resistance."
The description continued: “This class takes as its starting point the right of Palestinians to fight for their own self-determination. Conservative thinkers are encouraged to seek other sections."

University of California Chancellor Robert Berdahl condemned the course description, saying: “It is not appropriate for an academic class to discourage or exclude anyone from attending on political grounds… that is very objectionable. The discourse cannot be constrained by the political perspective of an instructor."
One pro-Israel student who attended the course reported that Shingavi handed out “literature that tries to justify Hamas and Hezbollah" and was “not open to dialogue about the Mideast."

On April 9, 2002, Shingavi and numerous other SJP members were arrested for unlawfully occupying a campus building and interrupting classes at UC Berkeley. The occupation of the building, at which SJP activists which demanded “that the University of California divest from all of its assets connected to Israel and the Israeli military," was intentionally timed to coincide with Holocaust Remembrance Day.
Despite clear pre-action warnings and repeated requests to leave, SJP members pushed past police, entered classrooms and lecture halls, chanting loudly and employing bull-horns while students were taking mid-term examinations.
In an open letter to the UC Berkeley community, Chancellor Berdahl strongly denounced SJP for "interfering with the rights of other students to continue their education" and suspended the group from campus. In response, Shingavi accused the university of "a systematic attempt to silence pro-Palestinian voices."

During a November 2014 talk, Shingavi likened Gaza to the Nazi death camps, claiming [00:13:15] that “This is not me being hyperbolic… Gaza is the biggest open air concentration camp in the world today and the condition of life in Gaza is not dissimilar to life in camps in Auschwitz and Dachau."
Shingavi has also demonized Israel at a number of anti-Israel rallies and protests.
On August 2, 2014, during Israel’s Operation Protective Edge (OPE), Shingavi spoke [00:03:56] at a “Texas Stands with Gaza" rally, where he alleged that OPE was based on “vicious lies" and that Israeli Prime Minister Benjamin Netanyahu “sent out lynch mobs where people roamed the streets and caught any Arab they could."

Shingavi also claimed [00:09:11] that OPE had "everything to do with the Zionist project, which has been the ethnic cleansing of Palestine since 1948 to the present… everything else that they have been telling you is a lie." 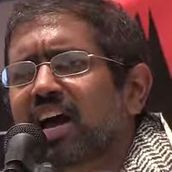 “[Netanyahu] sent out Lynch mobs, where people roamed the streets and cut any Arab they could.”
Snehal Shingavi, YouTube, Aug 16 2014
“This is not me being hyperbolic...Gaza is the biggest open air concentration camp in the world today and the condition of life in Gaza is not dissimilar to life in camps in Auschwitz and Dachau.”
Snehal Shingavi, YouTube, Nov 27 2014
“All of this has been lies. This is nothing to do with making Israel safe. This is nothing to do with Israel defending itself. This has everything to do with the Zionist project which has been the ethnic cleansing of the Palestine since 1948 to the present. Everything else they have been telling you is a lie....These lies are made possible by the government of the United States.”
Snehal Shingavi, YouTube, Aug 16 2014
0 Shares