Magid Shihade has mocked the Holocaust, spread anti-Semitic blood libels, equated Zionism with rape, denied Jewish history and demonized Israel.
Shihade is a founding member of the US Campaign for the Academic and Cultural Boycott of Israel (USACBI), which seeks to implement the Boycott, Divestment, Sanctions (BDS) movement in the United States.
Shihade has travelled across America to speak at Students for Justice in Palestine (SJP) chapters in Arizona, Indiana, Texas and California. He is also a supporter of disgraced anti-Israel professor Steven Salaita.
Shihade co-founded Pakistanis for Palestine with his wife, Professor Sunaina Maira, which calls on Pakistanis to adopt BDS and to “oppose the normalization of Israel in Pakistan at the level of state and also civil society."
Shihade is a postdoctoral transregional fellow at the Social Science Research Council, and a research fellow affiliated with the Middle East/South Asia Studies program at the University of California, Davis (UC Davis). It was reported that Shihade promoted pro-Hamas propaganda at UC Davis
Shihade is also a faculty member at the Institute for International Studies at Birzeit University (Birzeit) near Ramallah.

Mocking the Holocaust and Jewish Fears of Genocide

On March 6, 2012, Shihade wrote a blog post for the Economist called “The Auschwitz Complex." The title of the post was later changed and accompanied by the comment “The original headline of this blog post was inappropriate and has been changed at the instruction of the editor in chief."
In his post, Shihade accused Israelis of disingenuously using a “trope" from the “Jewish national playbook" when expressing anxiety about Iranian rhetoric concerning its nuclear program in conjunction with Iran’s long history of calling for Israel’s elimination.
In a 2006 essay called “The Palestinian Israeli" published in the book “Men of the Global South," Shihade wrote that “I was among many Palestinian-Israelis who cheered for Iraq whenever a scud missile hit Israel. Why shouldn’t I?" (p. 352).

In July of 2014, Shihade wrote that Israel has a “sadistic policy of hunting Palestinians, of aiming to constantly unsettle the natives, at using them as a lab for weaponry, as a lab for Israeli electoral games; the more you kill Palestinians, the more you get Israeli votes in the next elections."
In the same article, Shihade belittled Israel’s right to self-defense, writing “the state has the right to protect itself. From what? From people who are a lab for Israeli racist politics, and a lab for Israeli weapons funded by the United States and the European Union."
Shihade concluded that the 2014 Operation Protective Edge (OPE) was, for Western powers, “a site of hunting or a hunting ground in which to display their masculinity."
Shihade has also written a book titled “Not Just a Soccer Game: Colonialism and Conflict Among Palestinians in Israel" that blames Israel for inter-Palestinian sectarian and communal violence.
According to a review written by anti-Israel professor Steven Salaita, Shihade’s book documents a violent 1981 soccer brawl in Israel between two clubs representing the largely Druze town of Julis and the largely Christian Arab town of Kafr Yassif.
According to Salaita, “Shihade uses interviews, archival research and close analysis of contextual state policies to illustrate conclusively that Israel was not only complicit in the attack on Kafr Yassif but a direct participant, orchestrating the mob violence and facilitating its rampage by offering logistical support."
Shihade also claimed that Israel plays “an active state role in encouraging or helping create such violence."

At a December 27, 2012 Palestine Solidarity Committee talk in India, Shihade analogized the creation of state of Israel to the act of raping a woman, with “Palestine" portrayed in the role of the victim.
Shihade then argued that “Palestine was colonized by a Zionist movement long before the Holocaust," and stated that Israel and the Zionist movement were founded on “settler-colonialism" — with the genocidal intention of doing “everything possible" to make Palestinians disappear.
Shihade’s presentation included a slide showing a map with the headline “Palestinian loss of land since 1947" that presented lands once controlled by Britain, Egypt and Jordan as autonomous “Palestinian land" purportedly stolen by Israel.
Shihade then claimed that Israel was the aggressor in the 1948 War and accused Israel of having an inherently “violent nature" that “constantly leads it to war against the Palestinian people and its Arab neighbors." He also blamed Israel for every war fought with surrounding Arab countries.
Shihade justified his claim that Israel has an inherently “violent nature" by pointing to Israel’s technological advances in arms and economic relations with other countries. Shihade went on to characterize Israel’s advances in security methods as a “myth" and to accuse Israel of projecting a false image of itself as “good at security" in order to sell market expertise abroad.

In a February 2013 article, Shihade alleged that “Jews had to be imported from Europe as settlers to make the idea of a state for the Jewish people possible" and implied that any Jewish connections to Israel had to be “invented from scratch."
Later in the article, he accused the “American empire" of using Israel as its proxy to mete out daily “violence and chaos to native Palestinian society" and to “make sure that violence and chaos become the destiny" of those outside the “racially white West" who reject “direct colonization."

In a November 28, 2012 comment, written in response to an online article, Shihade propagated the claim that Israelis “ethically cleansed [sic]" the country of most of its inhabitants and stated that “It is a violent state by nature, and violence is the only mean it achieves its being [sic]."
Shihade published an anti-Israel essay in anti-Israel activist Ali Abunimah’s 2015 book “The Academic Boycott of Israel and Its Critics" (p.45).
In his essay, Shihade alleged that he “did not receive one job offer in the United States" because of a “blacklisting" of scholars who are not supportive of Israel.

In November 2, 2015, Shihade wrote a blog post on the Anthropologists for the Boycott of Israeli Academic Institutions website encouraging the American Anthropological Association (AAA) to adopt a resolution to boycott Israeli academic institutions.
Shihade argued that the boycott would “help all academics… regardless of the location where they work." The resolution failed to pass in June 2016.
Shihade is a member of the American Studies Association (ASA) and its Activism and Community Caucus (ASA Caucus).
In 2012, the ASA Caucus proposed a resolution calling for an academic boycott of Israel, which was later adopted at the ASA Conference in 2013.
In March of 2010, Shihade signed a petition to have an Israeli scholar ejected from an academic conference in Los Angeles.
Shihade has also called on Palestinians to boycott products of “Western states that support Israel," including the United States, Canada, Australia and most countries in western and northern Europe.

On December 10, 2014, it was reported that Shihade promoted pro-Hamas propaganda at UC Davis and insisted that Jews have no ancient historic connection to the city of Hebron
.
It was also reported that Shihade relied upon discredited anti-Semitic academic resources for material in his courses.

In November of 2015, Shihade signed a petition advocating for the University of Illinois (U of I) to reinstate Steven Salaita.

In February 2019, Salaita stated that he became a school bus driver in the Washington, D.C area. 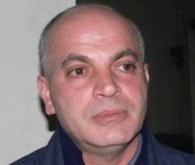 “I was among many Palestinian-Israelis who cheered for Iraq whenever a scud missile hit Israel. Why shouldn’t I?”
Magid Shihade, The Palestinian Israeli, 2006
0 Shares