Yoel Bitran has spread hatred of Israel and Zionism and was a leader within the Boycott, Divestment, Sanctions (BDS) movement at Princeton University (Princeton).

In 2010, Bitran was the president of the Princeton Committee on Palestine (PCP).

Bitran is also an activist with IfNotNow, an organization that uses disruptive tactics to drive a wedge between American Jewry and Israel.

As of September 2017, Bitran’s LinkedIn account said he graduated Princeton in 2011 with a bachelor’s degree in Sociology. Bitran is listed as an organizer with Unite Here Local 23.

Spreading Hatred of Israel and Zionism

On May 7, 2015, a photo of Bitran was posted on Facebook that showed Bitran with another person painting a wall with the words: “Question your leaders!!! US AID… Israel in ethnic cleansing/apartheid in Palestine…"

On September 17, 2017, Bitran shared a Facebook status that read: “Pretty much the entire Zionist historical framework is post-facto shameless propaganda."

On July 20, 2017, Bitran wrote a Facebook post that read: “The Zionist movement -and many many Democrats- is supporting legislation that is so authoritarian and repressive. This is what Zionism really stands for, always has and always will, an ideology in fundamental contradiction with basic Democratic values that can only be maintained with the logic of Dictatorship."

The Facebook status continued: “For Jews in the United States who claim to stand for freedom and justice and yet support Zionist Apartheid and its repressive policies in Israel and around the world: You need to pick a goddamn side."

Bitran commented: “This oped is a lame sack of Zionist bulls**t…."

In 2010, Bitran led a PCP campaign at Princeton "calling for a boycott of Sabra hummus" because the company reportedly “provides Israeli soldiers with care packages."
PCP created a referendum calling on Princeton’s dining services to sell an alternative hummus to Sabra on campus.
Bitran also referred to Sabra “a product that is connected to human rights abuses against Arab civilians." Students voted down the referendum by 1,014 to 699.

Bitran shared a screenshot of a text message posted by the Return the Birthright Facebook page as a model response rejecting Birthright recruitment messaging.

The text read: “Hello, I do not believe it is right for me to get a free trip to Israel, a place where I have no familial connections whatever, when my Palestinian friends can’t return to their homeland. I would like to give my spot to someone who truly deserves to go there."
The text continued, “Let me know if you’d like a list - I am sure I could connect you with plenty of young Palestinians who would relish the opportunity to go on a free trip to their country." 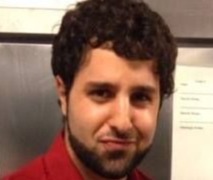