Nolan Cherry has demonized Zionists and Israel on social media. He has also tweeted anti-American remarks.

In June 2015, Cherry tweeted that he was a former student at Middle State Tennessee University (MTSU).

As of July 2018, Cherry used only the Hindi spelling  (नोलन चेरी) of his name on Facebook and used the alias “Phrygian Ganymede” on Twitter.

During a June 18, 2015 Twitter discussion with Sarah Mahmoud, Cherry tweeted in reference to Zionists: “they treat anyone who isnt a follower of the Torah that way theyre bigets yet if you speak out about it youre anti semantic .”

Mahmoud replied by claiming that Zionism “itself is anti-Semitic.”

Cherry then tweeted: “I totally agree!  that's why they're is a Koran on my night stand! Never will I even pick up a Torah. #FreePalestine.”

In the same June 18, 2015 Twitter discussion, Cherry tweeted: “Israel is nothing but racist and we'd rather aid a country who are hateful to peaceful Muslims than help our own smh.”

On the same day Cherry tweeted: “they [Israel] just love the billions of dollars Americans send so they can continue there anti Palestine propaganda

Also on June 18, 2015, Cherry tweeted that “America is Israel's puppet for sure! This right here is proof hahaha smh

The tweet included a graphic by Christians United for Israel (CUFI) promoting support for Israel.

Cherry also tweeted another image and commented: “I can't make this stuff up haha this is why Americans are stupid.”

The tweet included an image featuring a Lion of Judah, Israeli flag and a star of David and Jesus with the caption: “I [love] Israel.”

On the same day, Cherry tweeted that “Americans are so stupid at the facts that they're are actual churches with charities called Jesus for Israel lmao smh

On May 21, 2015, Cherry tweeted: “If I ever become famous the first thing I'm going to do is brainwash all the kids to overthrow the government.”

On June 19, 2015, Cherry tweeted: “When America burns I will only laugh and think to myself you asked for it. It happened to Ancient Rome, don't be naive it will happen here.” 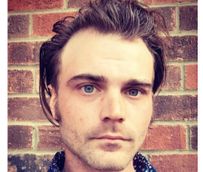