Mustafa Asfar has spread violent hatred against Jews and hatred of Israel on social media.

Asfar is a manager at Queen City Auto. He studied for a degree in Business at the University of North Carolina, Charlotte (UNC Charlotte).

On July 8, 2014, Asfar retweeted a tweet that denied Hamas’ culpability in the kidnapping and murder of three Israeli high-schoolers.

Hamas admitted responsibility for the June 12, 2014 kidnap and murder of three Israeli high-schoolers. The boys’ bodies were found buried in Palestinian-controlled territory on June 30, 2014.

On July 24, 2014, Asfar retweeted a tweet approving of Hamas firing rockets at Israel.

On February 4, 2015, Asfar retweeted a cartoon implying the U.S. and Israel conspire to control ISIS and terrorize Arabs."

The Al-Durah hoax is an iconic piece of anti-Israel propaganda, fabricated on September 30, 2000 at the start of the Second Intifada by a France 2 reporter. 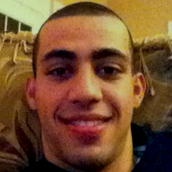