Mohammad Jabr has spread hatred of Jews and demonization of Israel on social media.

Jabr is also connected to other social media users, whose feeds are replete with anti-Jewish posts. These connections are detailed at the bottom of this profile.

Jabr lists himself as the owner of Liberty Boost Mobile, in Missouri.

Jabr claimed to be a student at the University of Missouri, Kansas City (UMKC), in 2014.

On July 24, 2014, Jabr tweeted: "Zionist Jews bring up the Holocaust to justify their torture of Palestinians... Get the f**k out of here with that bs."

On July 18, 2014, Jabr tweeted: "Israel is using unfamiliar toxic gases against Palestinians. Kind of like what the Nazis did to the Jews??? #FreePalestine."

On July 5, 2014, Jabr tweeted: "What Israel is doing to Palestine is no better than what Hitler did to the Jews. The only difference? The Jews got help. Palestine is not."

On July 2, 2014, Jabr tweeted: "Jews went through the same thing in WW2 and the world helped. Who's helping Palestine???"

Also on July 2, 2014, Jabr tweeted: "It's sickening what Israel is doing to Palestine. We're all witnesses of genocide and the world is watching without doing anything."

On December 14, 2016, Jabr retweeted a tweet by Chicago-based Cosmetology student Mary Mansour depicting the Jewish state as a baby snake being milk-fed by a Palestinian, who then grows up into a large, vicious, ungrateful, serpent that devours the Palestinian alive. Mansour wrote: "this is a powerful picture. #FreePalestine."

On August 13, 2014, Jabr tweeted: "@IDFSpokesperson @Israel @netanyahu I seriously hope each and everyone of you ZIONISTS dies. I wouldn't piss on you if you were on fire."

On the same day, Jabr tweeted: "AND A BIG F**K YOU TO @BarackObama FOR SUPPORTING ISRAEL."

Jabr interacts with other Twitter users whose feeds are also replete with anti-Jewish posts. Below are some representative connections and examples of social media posts evidencing their anti-Semitism:

Jabr interacted for years on Twitter with Omar Najjar — who studied at Ohio State University (OSU).

On December 27, 2012, Najjar tweeted:"‘@Boargasim: What's the difference between a Jew and a pizza. The pizza doesn't scream when it gets put in the oven’RT, f**k jews."

On August 5, 2015, Najjar tweeted: "@omgpalichick I recieved a B+ in that class. Damn jew teacher wouldn't raise it

On October 5, 2014, Najjar tweeted: "@rannnaaaa_ dope tbh. Almost beat the hell out of a Jewish lady lmao. But it was gucci."

Najjar also had a years-long correspondence on Twitter with Basil Ali — an Ohio-based college student — and avid gun enthusiast — who has has advocated violence against Jews and Israelis.

On July 26, 2014, a picture of himself wearing a keffiyeh and aiming a pistol at the camera, adding: "F**K A ZIONIST.

On July 1, 2014, Ali tweeted a picture of children brandishing automatic weapons, participating in a Palestinian Islamic Jihad (PIJ) child-soldiers training camp. Ali’s comment on the picture read:“Kill all them!

Jabr has also interacted on Twitter with Moe Hamdan — a student at Cuyahoga Community College (Tri C), who has expressed violent hatred of Jews and promoted Holocaust denial.

On April 9, 2012, Hamdan tweeted: "@Michaellaax3 if you go to Starbucks your a jew Idc what you say n you will get knocked out."

On October 11, 2012, when Lara Kollab — then a student at John Carroll University (JCU), in Ohio — tweeted: "If I have to write a paper about the holocaust, I'm going to bring palestine into it and my professor better like it," Hamdan responded: “@ellekay_ make sure you mention the fact that ‘The Holocaust’ never happened."

On March 1, 2014, Hamdan tweeted: "Wake up and see what Israel is doing to USA, Iran, and Europe. http://youtu.be/CNdZccLhDvY." The tweet included a link to a youtube video by David Duke, former Grand Wizard of the Ku Klux Klan. Duke is a convicted felon, Holocaust denier and anti-Semitic conspiracy theorist.

Jabr also corresponded for years on Twitter with Moe Clammy Hamdan — a student at Cuyahoga Community College (Tri C) in OH, who has tweeted violent anti-Semitism.

In an August 4, 2014 Twitter exchange, Hamdan tweeted: "@karinedri listen here bitch . Why don't one of your little Jew ass bitchs come over to Palestine so we can smack the f**k outta ur ugly ASS."

Hamdan added: "@karinedri you Israelis are nothing , your trashy hoes . Your just another s**t I take in the toilet and use your flag to whip my fat ass ."

Hamdan later followed up: "@karinedri SHUT THAT WHORE MOUTH OF YOURS U C**T ! I don't wanna hear that or your grounded ! Hoe ass nigga 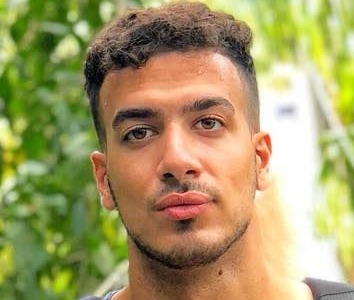