Lara Kiswani has called for Israel’s destruction “to benefit everyone in the world," demonized Israel as well as America and expressed support for terrorists.
As of August 2019, Kiswani was the executive director of the Arab Resource and Organizing Center (AROC) in the San Francisco Bay Area.

Kiswani is a supporter of the Boycott, Divestment, Sanctions (BDS) movement.

As of August 2019, Kiswani’s AROC profile said she co-founded Students for Justice in Palestine (SJP) at the University of California, Davis (UC Davis). She was reportedly [00:00:30] an SJP activist at UC-Davis in October 2003. Kiswani also spoke at the 2015 National SJP Conference.

On November 25, 2014, Kiswani appeared in a Youtube video from a BDS panel earlier that month, claiming that [00:00:18]: “... bringing down Israel really will benefit everyone in the world, everyone in society, particularly the workers."

The panel she spoke on was convened November 12, 2014, by the “UAW 2865 BDS Caucus," part of the International Union, United Automobile, Aerospace and Agricultural Implement Workers of America (UAW). There, Kiswani and other anti-Israel speakers spoke in favor of a then-upcoming vote for the University of California student workers to vote on BDS.

In the same video, Kiswani was filmed characterizing [00:00:42] Israel as “colonialism in Palestine," emphasizing that she meant all of Israel. She also addressed Israel supporters, saying [00:01:01]: “As long as you continue to be on that side, I'm going to continue to hate you."

Kiswani called [00:02:12] Israel “the settler colonial and apartheid state of Israel," when she denounced the decision of the U.S. government to move their embassy from Tel Aviv to Jerusalem and to recognize Jerusalem as Israel’s capital.

She also praised [00:02:55] anti-Israel agitator, Ahed Tamimi, for “fighting back against white supremacy."

Ahed Tamimi was detained after she was filmed punching and kicking Israeli soldiers. She has a long history of physically attacking Israeli soldiers.
Tamimi is the daughter of Bassem Tamimi, who is known for exploiting young children as political props in staged confrontations with Israeli soldiers. In 2011, he was jailed for organizing violent rallies and inciting minors to commit violent crimes such as rock-throwing.

On September 4, 2013, Kiswani gave an interview to the anti-Israel website Electronic Intifada (EI), where she supported a hunger strike by Palestinian prisoners in Israeli jail. A photo in the article identified two of the hunger-strikers as Marwan Barghouti and Ahmad Sa’adat, both leaders of U.S.-designated terror groups.

In the interview, Kiswani said: “The US exports torture tactics and policing strategies all across the world and specifically within the state of Israel."

She also decried “interests of the US within the state of Israel and its expansion of empire and its corporate interests" and referred to America as the “US imperialist country."

On July 23, 2014, Kiswani posted to Facebook a flyer promoting an AROC protest against Israel during its Operation Protective Edge (OPE) against Hamas. The flyer featured a photograph of terrorist Leila Khaled.

Khaled was a leading member of the Popular Front for the Liberation of Palestine (PFLP) and participated in the hijacking of TWA Flight 840 in 1969 and El Al Flight 219 in 1970.

Khaled has said that the second intifada failed because it was not violent enough, advocated for the use of children in terror activities and compared Zionists to Nazis.
On November 12, 2014, Kiswani posted an image to her Facebook page showing Rasmea Odeh, with the title: “Free Our Beloved Rasmea Now."

Odeh confessed, in a highly detailed account, the day following her arrest. In a 2004 documentary, one of Odeh’s co-conspirators directly implicated[00:10:53] Odeh as the mastermind.


In 2017, after an appeal and a lengthy court battle, Odeh admitted to immigration fraud, was stripped of her U.S. citizenship,deported to Jordan and banned from re-entering the U.S.

On October 10, 2015, Kiswani appeared in a Twitter photo, speaking at the opening plenary session of the 2015 National SJP Conference.
On October 31, 2014, EI reported that Kiswani and AROC led a high-profile BDS campaign called “Block the Boat," designed to stop an Israeli shipping vessel from docking in the Port of Oakland.
On August 4, 2014, Kiswani promoted the “Block the Boat" protests on Facebook with an image that accused Israel of “apartheid." She wrote: “STOP THE SIEGE ON GAZA! END THE COLONIAL OCCUPATION OF PALESTINE! RIGHT OF RETURN FOR ALL PALESTINIAN REFUGEES!"

The United Nations approved the Israeli-Egyptian blockade of Gaza in 2011 as a security measure to stop Hamas from acquiring sophisticated rockets. Multiple flotillas have attempted to breach the blockade, with at least one flotilla initiating a violent confrontation with Israeli forces.

The “right of return" is a Palestinian demand discredited as a means to eliminate Israel. International law mandates no absolute right of return and UN Resolution 194, which defined principles for “refugees wishing to return to their homes," was unanimously rejected by Arab nations following the 1948 Arab-Israeli War.

In the video, Kiswani boasted [00:03:43] about having refused to talk to campus Zionist groups. 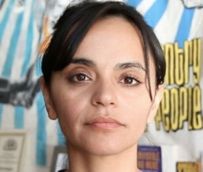 “Because bringing down Israel really will benefit everyone in the world, everyone in society, particularly the workers.”
Lara Kiswani, Youtube, Nov 25 2014
0 Shares