Eric Brown was an organizer for Students for Justice in Palestine (SJP) at the University of Florida (UF).

He supported the Boycott, Divestment, Sanctions (BDS) movement on the UF campus. Brown was also a member of Dream Defenders (DD) and a member of Students for Democratic Society (SDS).

Brown graduated from UF in 2014 with a degree in Political Science.

On April 7, 2015, Brown and other SJP members demonstrated at UF against the Israeli Defense Force (IDF)'s alleged "discrimination" against Palestinian Christians.

In September 22, 2014, Brown wrote an article promoting the academic boycott of Israeli institutions and claimed that "Israel is a rogue state actively engaged in the ethnic cleansing of Palestinians." Brown continued by likening Israel to Apartheid South Africa and concluded that “Divestment is necessary for peace."

On May 27, 2014, Brown co-authored an article with former SJP UF president Rami Okasha, titled “Settler colonialism is alive in Israel." The article attempting to portray Israeli Jews as European colonialists alien to the country.

The piece again made a comparison between Israel and the Apartheid South Africa in 1980’s, claiming that Israel has "segregated roads" and that Israel engages in home demolitions “for erasure, both of Palestinian people and their history."

On July 15, 2014, Brown co-authored another article with Rami Okasha which claimed that Operation Protective Edge (OPE) constituted “unjust collective punishment" and that the Israeli “justification for the bombing of Gaza" was “the kidnapping and now death of three teenage Israeli settlers."

On November 26, 2012, Brown wrote an article for the student newspaper with SJP member Farah Khan blasting a demonstration on campus titled "UF Stands With Israel."

In the editorial, Khan and Brown claimed that Israelis are committing an “ethnic cleansing of Palestine" and that Israel practices apartheid.

On March 21, 2013, Brown and other SJP members blocked pedestrian traffic on the UF campus to express solidarity with Palestinian terrorist, Samer Issawi. Issawi received a 26-year prison sentence in 2002 for possession of explosives — and his involvement in a series of shooting attacks targeting students and police at Hebrew University.

Samer Issawi is a member of the Democratic Front for the Liberation of Palestine (DFLP) who received a 26 year prison sentence in 2002. During the second intifada, Issawi manufactured and distributed pipe bombs and, in several incidents, fired indiscriminately on Israeli civilian vehicles.

In December 2013, the Israeli Hadash Party posted on its official Arabic Facebook page an interview where Issawi called for the kidnapping of Israelis: “We want the release of the prisoners. The prisoners' release will be brought about by kidnapping and [prisoner] exchanges. Nothing will happen without that."

On December 7, 2012, Brown posted a photo of PFLP terrorist Leila Khaled superimposed with the text "If it does good for my cause, I’ll be happy to accept death."

Khaled is a leader of the Popular Front for the Liberation of Palestine (PFLP) and participated in the hijacking of TWA Flight 840 in 1969 and El Al Flight 219 in 1970. As of 2017, Khaled was a member of PFLP's Political Bureau. In 2014, Khaled said that the second intifada failed because it was not violent enough.

MLI is an educational program geared to assisting Muslim Americans "understand why Jews believe what they believe, how Jews see their history, why Jews are so attached to this contested strip of land (Israel) — and thus to better engage with American Jews." According to Antepli, “MLI aims to put mainstream North American Jewry in conversation with their Muslim counterparts."

The letter shunned the program, proclaiming: “We pledge to not give a platform to any MLI participant to speak about their experiences at our community centers, places of worship, and campuses and call on a complete boycott of MLI. We pledge to be in solidarity with the Palestinian struggle and to do so by honoring the BDS call."

The letter rejected the notion "that there is the need for Muslim Americans to engage with the State of Israel," unless their interactions "promote Palestinian liberation and comply with Palestinian demands."

On September 9, 2014, Brown wrote a letter to the student newspaper editor in defense of Professor Steven Salaita, the Edward Said Chair of American Studies at the American University of Beirut (AUB).

Brown condemned what he characterized as "the removal of Steven Salaita, a tenured professor at the University of Illinois (U of I), for his tweets in support of Palestine," claiming that U of I’s decision not to hire Salaita “should be of great concern to those who value academic freedom at American Universities."

Since 2013, SJP UF has promoted BDS at UF and in April 2016, commenced a BDS campaign at UF to boycott Sabra Hummus, because it is partially owned by an Israeli company.

On September 16, 2014, during a debate between former Israeli Ambassador Michael Oren and Palestinian Journalist Rula Jebreal, SJP UF members staged a protest outside the venue. SJP UF was originally asked to co-sponsor the event, but refused on the grounds that it "normalizes the occupation of Palestine as well as Israeli Apartheid policies/laws" and that "any project with Israelis that is not based on a resistance framework serves to normalize relations."

In February 2015, two IDF soldiers were invited to the UF campus to share their personal stories with students. In the middle of their talk, SJP UF members stood up in protest wearing shirts that read, “You’re the real terrorist." They then staged a walk-out.

On November 11, 2015, SJP UF hosted New York-based poet Remi Kanazi. Kanazi is notorious for his aggressively anti-Israel poetry and spoken-word performances. In a November 15, 2012 Facebook post, Kanazi wrote, “Dear Zionists: You have never ‘defended yourselves.’ You came in, stole land that wasn’t yours & maintained a racist state through massacres and brute force." 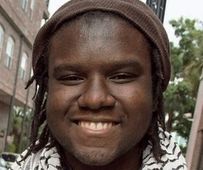 “Living in a society that is overwhelmingly Zionist can easily become discouraging, and at times, it can make me wonder if I’m insane.”
Eric Brown, Alligator.org, Nov 26 2012
0 Shares