Emma Youcha has expressed support for terrorist Rasmea Odeh on behalf of Students for Justice in Palestine (SJP) at Tufts University (Tufts SJP), in 2015.
Youcha has also opposed the Anti-Semitism Awareness Act — a bipartisan bill drafted in response to growing anti-Semitism in the United States and passed unanimously by the United States Senate.
On October 6, 2017, Youcha participated in the #returnthebirthright campaign launched by the anti-Israel Jewish Voice for Peace (JVP) organization.
As of October 19, 2107, Youcha’s Facebook page listed her as a student at Tufts, since 2014.

On October 14, 2015, Youcha posed for a photo on the Tufts SJP Facebook page with sign reading “Justice 4 Rasmea," a show of support for terrorist Rasmea Odeh. The Facebook page solicited donations for Odeh’s appeal fund.
Odeh was a key military operative with the Popular Front for the Liberation of Palestine (PFLP) terrorist organization. In 1969, she masterminded a PFLP supermarket bombing that killed two college students. She also attempted to bomb the British consulate in Jerusalem. Odeh later moved to the United States but was deported to Jordan in 2017 for immigration fraud.

In December of 2016, Youcha signed a JVP-launched petition against the Anti-Semitism Awareness Act (AAA), unanimously approved by the United States Senate on December 1, 2016.
The AAA directed the Office for Civil Rights (OCR) to use the U.S. State Department’s definition of anti-Semitism when evaluating hostile environment complaints.

On October 6, 2017, Youcha featured in a JVP Facebook photo to promote the organization’s #returnthebirthright campaign, under the caption “Tufts Jewish Voice for Peace tabling for our campaign!"

On May 10, 2017, Tufts SJP activists participated in the “Saltwater Challenge," in solidarity with Palestinian inmates in Israeli prisons who were then on a hunger strike.

More than 1,500 Palestinian prisoners participated in the hunger strike — most of whom were also convicted for acts of terrorism.

The hunger strike was initiated by Marwan Barghouti, who was serving five consecutive life sentences for his role in suicide bombings and shooting attacks — that killed five Israelis during the second Intifada. Barghouti also financed the guitar-case bomb used in the Sbarro Cafe massacre, where 15 civilians were killed and 130 injured.

In a short video of the event produced by Tufts SJP, activist Amira Subaey claimed that Israel practices “apartheid" (0:40) and that Tufts SJP was “protesting the conditions in Israeli prisons" (0:20). Barghouti completed his doctorate in Political Science while in Israeli prison.

Also among the hunger strikers was Popular Front for the Liberation of Palestine (PFLP) Secretary-General Ahmad Sa’adat, jailed for his role in organizing the assassination of Israeli Tourism Minister, Rehavam Ze'evi in 2001.

On May 11, 2017, Tufts SJP also promoted another event supporting the hunger-striking prisoners.

On February 28, 2017, Tufts SJP shared a video from the BDS movement that called, in its English language subtitles, for “human rights" (0:28) and “nonviolent resistance" (1:02). However, the video also featured multiple indications (0:03 and 0:47) of support for PFLP militant Bilal Kayed. Kayed was incarcerated for 14 years for terrorist operations committed during the second Intifada.

On November 2, 2016, Tufts SJP questioned whether Tufts Hillel was fit to host an event on “indigenous genocide and settler-colonial violence," since Hillel receives funding from Israel.

Through its program Tufts Against Genocide (TAG), Tufts Hillel hosted a lecture about a massacre of Native Americans in 1864 “as part of a larger conversation on genocide of indigenous peoples in the U.S."

TAG teaches students about “genocides in countries such as Cambodia, Bosnia, Rwanda, Darfur, Armenia and the Holocaust" in order to “understand the root causes of genocide, advocate for prevention, understand the aftermath, and combat prejudice in our own communities today."

Tufts SJP, in its Facebook statement, said that it was “hurt" and “disturbed" that Hillel hosted the event. 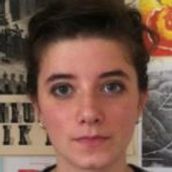