Emily Wilder is a member of the anti-Israel Jewish Voice for Peace (JVP) organization and is an affiliate of Student for Justice in Palestine (SJP) at Stanford University (Stanford).

Wilder has promoted and participated in the #returnthebirthright initiative, launched by JVP against the Birthright Jewish heritage tour.

As of February 2018, Wilder’s LinkedIn said she was a student at Stanford, majoring in History and slated to graduate in 2020. In the summer of 2017, Wilder interned for JVP in Oakland, California.

On December 21, 2017, Wilder appeared in a JVP Facebook video and said [00:00:23]: “It’s fundamentally unjust that I, as a Jewish person, am born with the entitlement to a land which Palestinians were ethnically cleaned and displaced."

On December 3, 2017, Wilder co-led a Return the Birthright protest outside the Taglit-Birthright offices in New York City, where JVP members assembled to chant anti-Birthright slogans.

Wilder spoke on a megaphone during the protest and said [00:12:29]: “This year marks the 69 years since the Nakba or the ethnic cleansing and displacement of Palestinians in Palestine in 1928, which is also the beginning of the occupation."

She then claimed [00:13:32] that “Birthright trips are nothing more than ethnic nationalist propaganda," and concluded [00:14:10]: “We are the next generation of Jews and we must decide to actively boycott Birthright. "

On December 4, 2017,Wilder posted a photo on Facebook from the protest that featured JVP activist Esther Tsvayg. Wilder and Tsvayg held a sign that said: “Wherever we live, that’s our homeland."
Also on December 4, 2017, Wilder wrote a post on Facebook, claiming that Birthright had an “agenda of racism and exclusion championed by the Israeli government…"

On November 26, 2017, Wilder wrote a Facebook post in which she declared that “...the nation-state of Israel does not represent a part of my Jewish identity or a "homeland" to which I must return. Because diaspora is beautiful and diaspora is where I will stay."

In the article, which was published in the Stanford Daily, JVP at Stanford criticized Stanford’s Hillel and Chabad student chapters for hosting a group of Israel Defense Force (IDF) reservists called “Reservists on Duty," following an incident that took place at the University of California, Irvine (UCI). On May 10, 2017, SJP at UCI attempted to shut down a panel event featuring the IDF reservists, and were later sanctioned by UCI for disrupting the event.

Wilder is also an affiliate of Stanford SJP and has attended several of their anti-Israel programs.
Wilder has indicated on Facebook that she “Went" to a Stanford SJP event on May 17, 2017 called “Join Students for Justice in Palestine in the #Saltwater Challenge."
The “Saltwater Challenge" was held in solidarity with Palestinian inmates hunger-striking in Israeli prisons.

The strike was initiated by Marwan Barghouti, who was serving five consecutive life sentences for his role in suicide bombings and shooting attacks that killed five Israelis during the second intifada. Barghouti led the Palestinian Authority (PA) terrorist Tanzim force and founded the Al-Aqsa Martyrs Brigades.

Barghouti also financed the guitar-case bomb used in the Sbarro Cafe massacre, where 15 civilians were killed and 130 injured. More than 1,000 other Palestinian prisoners participated in the hunger strike — most of whom were also convicted for acts of terrorism.
The “Saltwater Challenge" was started by Aarab Barghouti, the son of Marwan Barghouti. 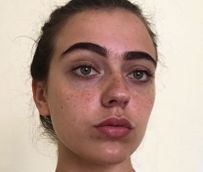