Elaine Cleary has demonized pro-Israel activists at Ohio State University (OSU) as the 2017-2018 president and “primary leader" of the Jewish Voice for Peace (JVP) chapter at OSU.
Cleary has advocated for the Boycott, Divestment, Sanctions (BDS) movement on campus and is an affiliate of Students for Justice in Palestine (SJP) at OSU. She has also promoted the #returnthebirthright initiative launched by JVP against the Birthright Jewish heritage tour.

Cleary graduated from OSU in 2017 with a degree in Economics and Political Science. Her undergraduate thesis was titled: Political Psychology and Economic Protest: The American Front of the Israeli-Palestinian Conflict."

As of August 2018, her Linkedin and Facebook pages said that she worked as an Immigration Paralegal at the National Immigrant Justice Center, in the Greater Chicago Area.

On March 23, 2017, Cleary wrote an opinion piece in Haaretz titled, “Expelled From Hillel, LGBTQ Jews Are Out of the Closet but Into the Cold." In her piece, Cleary accused Hillel International of pressuring OSU Hillel to expel B’nai Keshet, a campus group Cleary helped found, from the Jewish campus community.

OSU Hillel cut ties with B’nai Keshet after the group co-sponsored an event with JVP. Hillel International “bans partnerships between its affiliates and groups that deny Israel’s right to exist, delegitimize the Jewish state or support the BDS movement."

On March 30, 2016, Cleary wrote a letter to the editor of her university’s newspaper, titled “Holding USG Accountable." In her letter, Cleary suggested that a student senator fabricated an anti-Semitic incident on campus “because of her latent racism."

Cleary wrote her letter following a “contentious and emotionally charged debate" over a BDS resolution at OSU, during which the senator “argued that the resolution was bringing about a culture of divisiveness."

On February 27, 2017, Cleary wrote an opinion piece in the OSU Lantern titled, “The Jewish case for Ohio State divestment." Cleary’s article promoted an initiative launched by the campus coalition “OSU Divest," which called on OSU to divest from corporations that “are complicit in the Israeli military occupation of Palestinian territories."
In her article, Cleary likened the demolitions of Palestinian homes to pogroms targeting Jewish homes by Christian villagers.

Cleary also claimed that Israel’s actions undermine “the very things that make us Jewish — a commitment to Jewish values, a belief in Jewish teachings, a connection to a long history of practice and struggle."

On February 24, 2017, JVP at OSU tweeted a photo of Cleary with another activist and captioned the photo: “Flyering for @OSUDivest!"

On March 4, 2017, OSU Divest featured Cleary in a Facebook photo with the caption, “Never have I felt more deeply Jewish than when I was supporting racial justice...when I look at the terrible things the US and Israel have done in my name, I see a world destroyed."

On March 6, Cleary commented on a Facebook photo posted by “Protect OSU," which featured a student saying “The Jews have a right to live in their indigenous land."

Cleary objected to the Facebook post, writing: “‘The Jews’ omg" and “That phrase has an implication and historical connotation that many Jewish people find offensive, but mistakes happen." She also wrote that “it's important to recognize the ways in which Israel advocacy can actually be anti-Semitic."

In her editorial, Cleary demonized Birthright, writing, “This isn’t a neutral trip to see a new country. It’s a government’s political project. And we, young American Jews, are on the agenda."

Cleary also claimed that Birthright prevents its participants from interacting with Israeli Arabs, alleging that “Birthright does not want young Jews to critically engage with Israel and its realities... They want us to take selfies on top of a camel and not ask questions."
Cleary concluded her article: “ I return the Birthright. Will you?"

Cleary is an affiliate of SJP OSU and has attended a number of their campus events.
Cleary has indicated on Facebook that she “Went" to an SJP OSU “Columbus to Gaza: Solidarity Rally," on July 29, 2017. The event description said the purpose of the rally was “to demand an end to American complicity in the illegal military occupation of Palestine."

Cleary has also indicated on Facebook that she “Went" to an SJP OSU event called “Raise the Kheffiyeh," on January 28, 2017.

Cleary has indicated on Facebook that she “Went" to an SJP OSU event called “R2E: Right to Education" on April 6, 2017.

The Right to Education campaign brings Palestinian university students to U.S. campuses to spread a libel that Israel is obstructing the rights of Palestinians to higher education. This claim mischaracterizes Israeli security sweeps to shut down terror cells operating on Palestinian campuses. 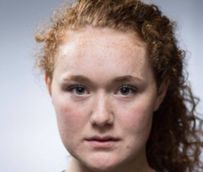 “Many non-Jewish people support Israel because they believe doing so is a way to advocate for Jewish people, but it's important to recognize the ways in which Israel advocacy can actually be anti-Semitic.”
Elaine Cleary, Facebook, Mar 6 2017
“Securing American Jewish support for Israeli occupation and discrimination requires an aggressive propaganda strategy”
Elaine Cleary, newvoices.org, Nov 14 2017
0 Shares