Dara Illowsky has promoted the #returnthebirthright initiative launched by the anti-Israel Jewish Voice for Peace (JVP) organization against the Birthright Jewish heritage tour.

Illowsky is a member of IfNotNow (INN) — an organization that uses disruptive tactics to drive a wedge between American Jewry and Israel.
According to Illowsky’s Linkedin page, she graduated Brown University (Brown) in 2014 with a bachelor’s degree in Environmental Science.

As of September 2017, Illowsky wrote on Facebook that she works as a legal assistant at Sierra Club in Boulder, Colorado.

On September 13, 2017, Illowsky posted her support for the #returnthebirthright campaign launched by JVP. Illowsky urged those considering a Birthright trip to either reject the trip completely, or to participate “but find a way to also go to occupied Palestine."

In July 2016, Breaking the Silence was discredited by Israel’s investigative Channel 10 TV show, HaMakor (The Source). HaMakor presented a report revealing that a substantial number of BTS testimonies are untrue or distorted. 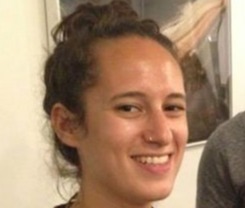