Bayan Founas was a member of Students Allied for Freedom and Equality (SAFE). The group indicates on it’s website that it is Michigan’s chapter of Students for Justice in Palestine (SJP).

She was one of the founding members of Michigan Boycott, Divestment, and Sanctions (BDS) when she was a sophomore, in 2012.

Founas was a member of the Muslim Student Association (MSA) at UM.

Founas and co-authors claimed that Zionism aspires to ethnic cleansing in a 2012 article, accusing Jews of plotting to "purify the land of non-Jews."

Founas graduated from the University of Michigan (UM) in 2014, with a Bachelor’s of Science in Biology.

In November of 2014, Founas tweeted her support for terrorist-murderer Rasmea Odeh.

SAFE at UM is a single-mindedly anti-Israel group. SAFE’s Constitution avers that it wishes, "within Israel proper," to ensure equal benefits, treatment, and rights for all citizens, regardless of race or religion. However, it also utterly condemns all “Israelis" living in, building on or moving to “the Golan Heights, Gaza Strip, and the West Bank, including East Jerusalem."

In December 2011, Founas wrote an article on SAFE’S behalf, labeling Zionism a "new offshoot of European Imperialism and a new variety of racist Colonialism" — but also referred to combatting Zionist colonization “through the ages." Founas called for a global struggle against Zionism “that ought to encompass all of humanity," claiming that Zionism is inherently “racist." She also inverted history, claiming that Jews had “segregated themselves" when under Muslim rule out of “a belief in Jewish superiority over non-Jews." In fact, Jews in Muslim countries were physically segregated and distinguished by Muslims as a non-Muslim minority. 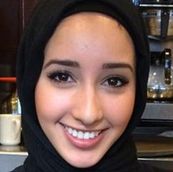 “What is happening in Israel and the Palestinian territories is not simply a ‘conflict.’ It’s a decades-long colonial campaign led by the Israeli military that aims to disenfranchise the indigenous race and to purify the land of non-Jews by implementing an apartheid system.”
Bayan Founas and co-authors, michigandaily.com, Apr 5 2012
0 Shares