Aysar Awad has expressed hatred on Twitter for “Jews," “white people" and “gay people." Awad regularly demonizes Israel on social media. As of February 2017 Awad’s background image on his Twitter account was the logo of the Boycott, Divestment and Sanctions (BDS) movement and a graphic of the State of Israel painted over entirely in the colors of the Palestinian flag.

As of June 2019, Awad’s LinkedIn page said he was a “Student at Eastfield College" in Dallas/Fort Worth, majoring in “engineering/Mathematics" and slated to graduate in 2024.

On January 16, 2017, Awad tweeted: "y'all too" along with a video clip of the Israeli Defense Force entitled “On This #MLKDay, we ask: What Are You Doing For Others?"

On August 22, 2016, Awad tweeted a graphic claiming the libel that Israel tests its weapons on Gazans.

On July 26, 2016, Awad tweeted a photo of Israel’s Prime Minister Benjamin Netanyahu with the caption: "I Don’t Always Send My Troops To Rape and Kill Arab Children, But When I Do, American Taxpayers Pay For It."

On July 2, 2016, Awad tweeted: "Let's not forget once the day comes israel will be gone and destroyed! #israeldoesntexist"

On October 7, 2015, Awad tweeted: "Khara ala Israel [S**t on Israel] #FreePalestine #dammifalastine [my blood is Palestinian]."

On the same day, Awad tweeted: “I hate Israel so much like i get disgust when I see them or hear the word Israel."

On June 19, 2015, Awad tweeted a graphic of Netanyahu, where half of his face is replaced by the image of a demon, with the caption: "The Only Shaytan (Demon) Not Locked Up This Ramadan."

On June 18, 2015, Awad tweeted: “No no he was protecting the kids while yahood [jews] were killing them for fun" in response to the tweet: “Hamas wanted a war. Hamas prepared for a war. Hamas launched a war. Hamas got a war."

On June 9, 2015, Awad tweeted: “@MustafaSuliman7 wallah bro when I hear Israel is involve Khalas [Enough] my mood is ruined." 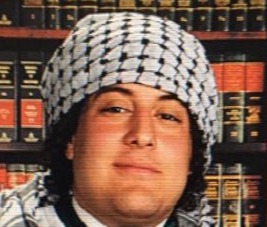