Asmaa Anbar has spread hatred of Israel on Twitter. She has also demonized Israel and supporters of Israel.

As of November 2017, Anbar’s Facebook page said she studied at Collin College in McKinney, Texas.

On April 13, 2015, Anbar tweeted a photo of a hand taking an Israeli flag and flushing it down the toilet.

On February 5, 2015, Anbar tweeted a montage of photos of someone ripping an Israeli flag off of a display of flags on a classroom bulletin board and stomping the flag into a  trash can. The caption on the photos read: “What is the meaning of this khara [s**t]?” On the photo of the Israeli flag in the trash the caption read “Where it belongs.”

In an August 16, 2014 Twitter argument with two women supportive of Israel, Anbar tweeted: ‘@shalevzaguri1 @FieldNiv @sissoko1991 I think the only people going to hell here is you, and the people that support terrorists like Israel.” Later in the exchange, Anbar added: “@shalevzaguri1 y'all are the only terrorists here,been killing Palestinians before Hamas even existed,thats just an excuse y'all keep using.”

Two days earlier, in a Twitter exchange with the same people, Anbar tweeted: “@FieldNiv @sissoko1991 @shalevzaguri1 both of you girls are fags and need to die for sure. Ugly s**ts.”

On August 7, 2014, Anbar tweeted: “A girl from Gaza wrote this poem: Israel has Satan. Palestine has Allah. Israelis can have this world, while Palestinians have Jannah.”

On July 11, 2014, Anbar tweeted: “@doenormaal_1 @sarinafa the truth is that Israel is disgusting and heartless.”

On July 1, 2014, in response to a tweet that read: “@honeyplum88 @Sumi_hasan You find it disgracefull when i say Palestinian terrorists should stop bombing Israël. You are completely insane!” Anbar tweeted: “@doenormaal_1 @Sumi_hasan They killed 3 boys, and what they do is kill millions of Palestinian people?? That's stupid and not logical.” 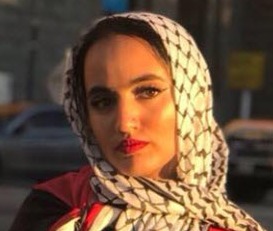