Ari Kaplan demonized [00:01:02] Israel and the United States with the anti-Israel Jewish Voice for Peace (JVP) organization at a 2017 Jewish campus event. He also promoted the Boycott, Divestment and Sanctions Movement (BDS) as well as the #returnthebirthright initiative launched by JVP against the Birthright Jewish heritage tour (Birthright).
According to a 2017 article from nyulocal.com, Kaplan is was a student at New York University (NYU).

As of October 2019, Kaplan’s LinkedIn page said he was a Production Assistant for WarnerMedia since September 2018 in the “Greater New York City Area" and previously a “Monologue Intern" with the Conan show, from May - July 2018.

On December 9, 2017, Kaplan attended a Sabbath dinner at the Jewish center of NYU. He and two others representing NYU JVP stood and read prepared remarks about “the current situation in Jerusalem because we could not stay silent."

Kaplan referenced [00:01:02] Washington’s decision to move its embassy in Israel to Jerusalem and said [00:01:06], “In Palestine and the rest of the world, response was of horror and anger with immediate and widespread protest for this reckless decision."
Promoting BDS

The caption on the photo read: “I joined Jewish Voice for Peace because I want to strengthen the BDS movement on my campus."

On April 16, 2018, Kaplan participated in a Return the Birthright protest organized by JVP outside the Taglit Birthright Gala in New York City.

On March 28, 2018, NYU JVP posted a video of a Return the Birthright rally featuring Kaplan. Kaplan read prepared remarks off a cell phone and claimed: [00:01:51] “...but today we must acknowledge that the modern state of Israel is predicated on the erasure of Palestinians.

He further said “Taking a Birthright trip today means playing an active role in helping the state promote Jewish return while rejecting Palestinians Right of Return" and that it is not enough for Jews to take the trip and “maintain a critical perspective."

Kaplan concluded: “We reject the offer of a free trip to a state that doesn’t represent us, a trip that is… paid for by the dispossession of Palestinians."

On March 5, 2018, the Return the Birthright Facebook page posted a picture of Kaplan holding a sign that read: “I return the ‘Birthright’ because everyone deserves to go home."

Accompanying Kaplan’s picture was text reading: “We reject a free trip to visit a state that welcomes us 'home', while our Palestinian friends and their families still can't visit, much less return to the place they called home for centuries."

On October 12, 2017, Kaplan featured in an NYU JVP Facebook photo, promoting JVP’s #returnthebirthright campaign.
Kaplan held a sign that read: “I #ReturnTheBirthright because Palestinians deserve THEIR Birthright."
The photo was also shared on the Return the Birthright Facebook page, which demonized Birthright as “a propaganda trip that whitewashes the systemic racism and daily violence faced by Palestinians living under endless occupation." 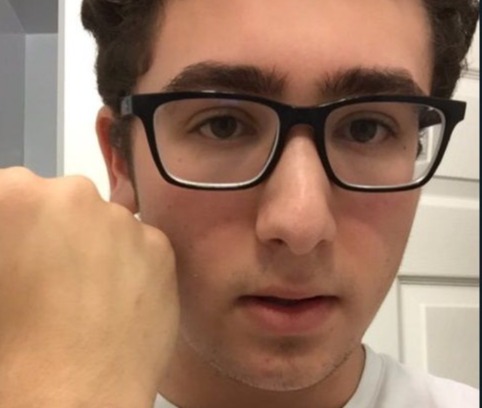 “I joined Jewish Voice for Peace because I want to strengthen the BDS movement on my campus.”
Ari Kaplan, Facebook, May 24 2018
0 Shares